Get in sync with Fliteboard

The Virtual Gear System is just one of many features that makes Flite Controller the world’s smartest eFoil controller.

The smallest motor with the best performance.

Everything rides on this

We created the first wing designed specifically for eFoiling. Then we made 13 more.

Think inside the box

Lightbar brings Fliteboard to life with an LED light array.

Not all batteries are the same.To fly faster, further and longer, you need the right power. 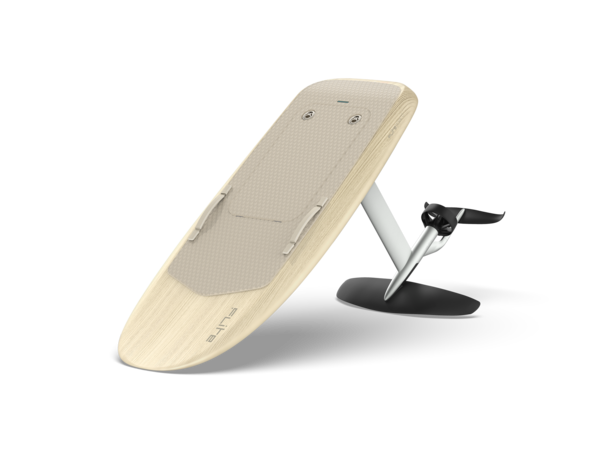 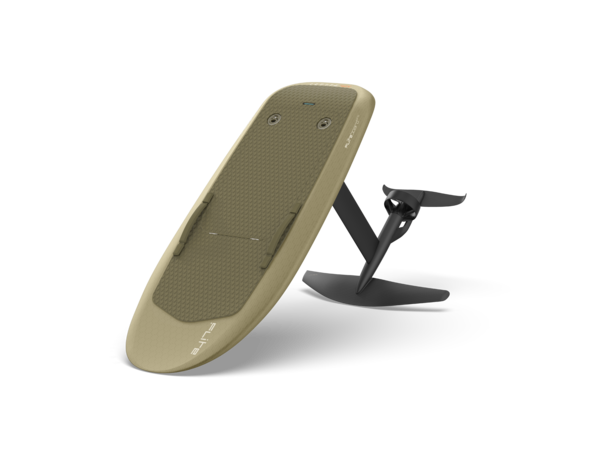 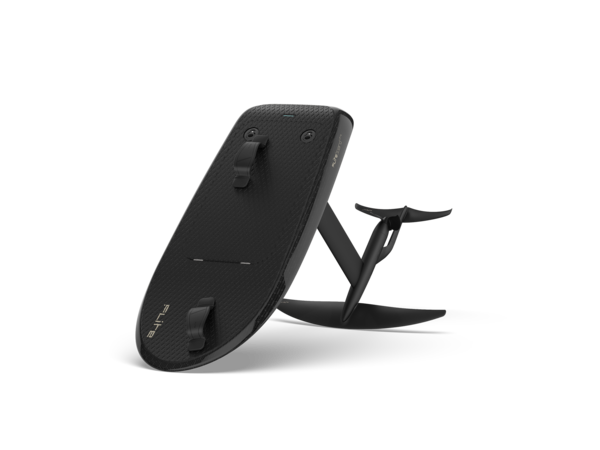 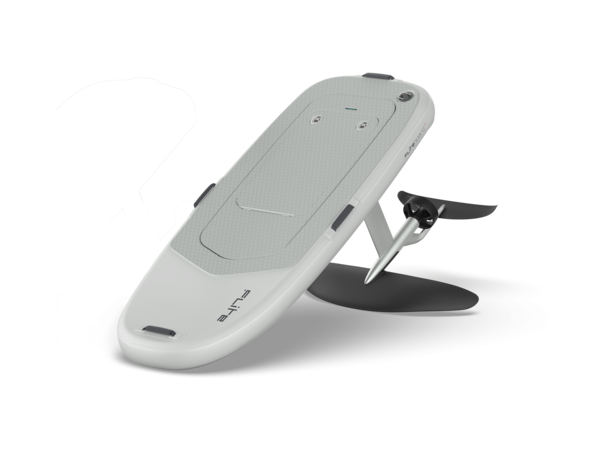 (Patented) Virtual Gears let you balancing the foil and not the trigger – to make learning easy and fun. Precise trigger control is available for advanced riders.

No plugs to connect, just snap on the charging magnet.

Easy to read in bright sunlight, the high contrast display presents a wide range of information at the touch of a button.

Flite Controller comes with a floating wrist strap so you’ll never lose it, and be free to use both hands when carrying your board.

What’s so special about the unibody fuselage?

It’s kind of a big deal. Integrating the foil and motor (instead of clamping it to the mast) results in the most balanced, responsive and efficient electric hydrofoil in the market. This means advanced riders can turn harder, explore further, ride faster, or have the ultimate pitch control on a wave face. It also allows beginners to learn more easily. 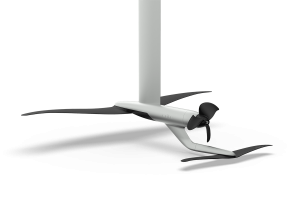 We use aircraft grade aluminium not just for it’s strength, but it also functions as a heatsink to cool the motor (so we don’t require cooling tubes). It works so well, we patented it.

Positioning the motor at the base of the hydrofoil lets you ride higher. The propeller stays under the water, where it should be. Two mast options let you choose your ride height.

The motor position also allows you to turn harder without breaching the motor.

When you’re riding close to 60km/h inches above the water you want to make darn sure you’re on the best performing eFoil available.

Our Unibody Fuselage design is highly awarded and on display in the design museum in Essen, Germany. But form follows function; you wont find a better ride.

We didn’t use any gearbox – it’s Neugart, developed in Germany for Fliteboard for unmatched torque output. It’s never failed on us. So it won’t fail on you.

Each fuselage is machined to perfection from a single block of aluminium. It’s a 15 hour process. No one said creating the world’s best eFoil would be easy.

We use a lightweight fibre reinforced propeller for less moving mass, better safety, balance and no vibration.

We use the smallest diameter motor on the market for greater hydrodynamic efficiency.

Each wing utilises a number of refined sections to achieve precise performance characteristics.

Our Flitebox system is manufactured from hard anodised aluminium and complete with finned heatsink for optimised cooling it avoids the need for complex water cooling tubes found on other systems. Also inside Flitebox is a powerful onboard computer that coordinates data from multiple sources for an optimised rider experience.

It’s an eFoil not an eBoard

We’ve taken all electronics out of the board. So there’s less to go wrong. And less to maintain.
We also made the Flitebox even smarter with a lightbar for instant communication to the rider.

We recommend using Flite App to ensure your board and controller always have the latest software to deliver the best performance.

The most nuanced elements have been refined, from improving the comfort and traction of our deck grips to updating the Flitecontroller circuitry for optimum low-power management. Details you might not notice, but will certainly appreciate.

We removed all electronics from the Fliteboard. This makes it maintenance free, simpler and easier servicing, improves corrosion resistance and reduces weight.

The Ultra is a 4’2” pocket rocket for advanced riders only (54 litres). Built on the core technologies that set Fliteboard apart, it’s smaller, lighter and would leave other eFoils in it’s wake (if it left any wake). Includes leash plug and optional footstraps.

We increased grip performance, designed lighter weight custom latches and colour coordinated it all, because we’re particular that way. After all, ‘good enough’, is not good enough.

We optimised the wireless communication from Flitebox to allow the RF signal to travel through the board (patent pending) to ensure improved connectivity.

By reducing the length of the inflatable AIR by 15cm, this makes it easier to ride (reduced swing weight and less affected by wind) while still maintaining buoyancy.

Integrated lightbar displays through the board providing detailed system communication to the rider (on and off the water).

This allows for better positional accuracy and improved metrics.

We improved the hydrodynamics of our tail fin by reducing it’s weight, and refining the design to minimise drag.

Less tools required to quickly and easily add/remove the prop.

No more cables or plugs.

Race 700 The name says it all. If fast carves and top speed is your thing, this 50km/h wing is for you. Performs best in Pro Mode with the prop duct removed.

Flow 1300 The ultimate wing for powered off wave gliding with our True Glide prop. Flow 1300 takes off early and glides, and glides. Despite it’s large size (1m span) it’s agile and responsive in turns.

Flow S 1300 This wing lets you ride slow and throw your Fliteboard around in wild turns, and catch waves.

Flow S 1100 This super-snappy wing is at a size that allows slow speed riding, but still with the ability to push hard.

Flow S 900 A wild wing that is the loosest of them all. For the most responsive ride possible at medium to fast speeds, try the Flow S 900.

Cruiser 1800 Our largest and most stable wing used at Fliteschools around the world. Suits beginners, heavier riders and those wanting a more docile ride. Early take-off and slow to medium cruising.

All new wing bags for all wings and stabilisers.

The True Glide prop allows you to ride waves with the motor turned off.

Revised app with functionality for Series 1 and 2, including Android.

We use cookies on our website to give you the most relevant experience by remembering your preferences and repeat visits. By clicking “Accept”, you consent to the use of ALL the cookies.
Cookie settingsACCEPT
Manage consent

This website uses cookies to improve your experience while you navigate through the website. Out of these, the cookies that are categorized as necessary are stored on your browser as they are essential for the working of basic functionalities of the website. We also use third-party cookies that help us analyze and understand how you use this website. These cookies will be stored in your browser only with your consent. You also have the option to opt-out of these cookies. But opting out of some of these cookies may affect your browsing experience.
Necessary Always Enabled
Necessary cookies are absolutely essential for the website to function properly. These cookies ensure basic functionalities and security features of the website, anonymously.
Functional
Functional cookies help to perform certain functionalities like sharing the content of the website on social media platforms, collect feedbacks, and other third-party features.
Performance
Performance cookies are used to understand and analyze the key performance indexes of the website which helps in delivering a better user experience for the visitors.
Analytics
Analytical cookies are used to understand how visitors interact with the website. These cookies help provide information on metrics the number of visitors, bounce rate, traffic source, etc.
Advertisement
Advertisement cookies are used to provide visitors with relevant ads and marketing campaigns. These cookies track visitors across websites and collect information to provide customized ads.
Others
Other uncategorized cookies are those that are being analyzed and have not been classified into a category as yet.
SAVE & ACCEPT
0
Your Cart
Your cart is emptyReturn to Shop
Continue Shopping